How CBD Works – Understanding CBD and the ECS

Although THC is easily the most popular cannabinoid due to its psychoactive effects, CBD has gained traction due to its non-intoxicating, medicinal benefits. According to the World Health Association, CBD is non-addictive, has no withdraw symptoms, and has a great safety profile, so it is no wonder many are turning to CBD for its numerous therapeutic benefits. Most notably, it has been a viable and effective option for relieving anxiety disorders, inflammatory conditions, and chronic pain.

What is the Endocannabinoid System (ECS)? 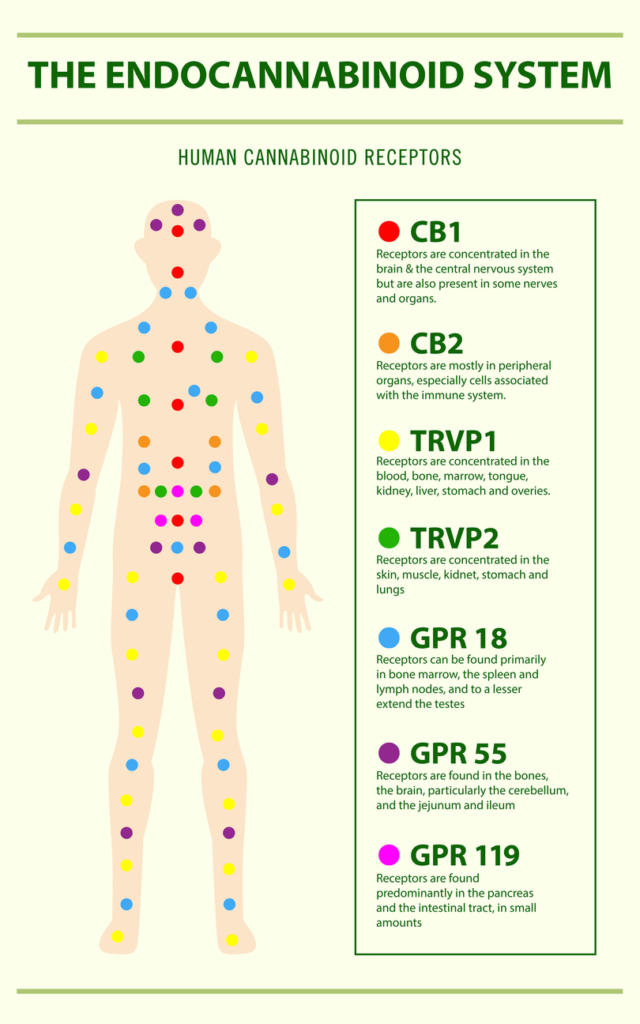 The Endocannabinoid System (ECS) was discovered in 1992 by a small team of scientists who stumbled upon an unknown, molecular signaling system within the mammalian body. The ECS is responsible for regulating a broad range of biological and physiological processes to include appetite, digestion, metabolism, pain-sensation, inflammation, mood, sleep, stress, and memory. However, the primary objective of the ECS is always the same – homeostasis, as it is quite literally the bridge between the body and the mind.

Regardless of whether or not we consume cannabis, everyone has an Endocannabinoid System. The ECS is largely comprised of three core components:

Similar to the phytocannabinoids produced by the cannabis plant (THC, CBD, etc.), the mammalian body also naturally produces cannabinoids (or endocannabinoids). Scientists have identified multiple endocannabinoids, however, the two prominent ones are anandamide (AEA) and 2-arachidonoylglyerol (2-AG).

Anandamide (AEA) is often referred to as the “bliss molecule”. It is a neurotransmitter that interacts with the body’s CB-receptors, much like the cannabinoid, THC. AEA’s ability to bind with both CB1 and CB2 receptors profoundly affects a myriad of physiological processes, including appetite stimulation, mood fluctuation, pain management, and even fertility.

Arachidonoylglyerol (2-AG) is present at high-levels in the central nervous system. It binds with and activates the CB1 receptor, as well as with the CB2 receptor. Therapeutically, 2-AG has shown to have promising analgesic and antiemetic properties. Both AEA and 2-AG are made on-demand, as-needed, and only when physiological imbalances are detected in the body.

Cannabinoid receptors reside on the surface of cells, and assess the conditions outside of the cell. When conditions change, they transmit information from the outside of the cell to the inside of the cell, to signal that the ECS needs to take action. The ECS is comprised of two primary endocannabinoid receptors: CB1 (found predominantly in the brain, nervous system, and outlying organs and tissues), and CB2 (found predominantly in white blood cells, tonsils, and spleen). Although CBD has a low affinity for either receptor, it does interact with other nominal receptors with remarkable effects.

For example, research has found CBD as an agonist to the 5-HT1A receptor, which is involved in a variety of biological and neurological processes such as anxiety, addiction, appetite, sleep, and pain perception. These findings convey a promising explanation for cannabidiol’s antidepressant, anti-anxiety, and neuroprotective effects.

CBD also binds with various TRPV (pronounced “trip”) ion channels, namely TRPV1 receptors, which are responsible for both pain perception, and inflammation, as well as activating the receptor GPR55, which has also shown promise in treating both pain and inflammation.

The third and final piece of the ECS is metabolic enzymes, which quickly destroys endocannabinoids once processed by the ECS. The two primary enzymes are FAAH, which breaks down AEG, and MAGL, which breaks down 2-AG. These enzymes ensure endocannabinoids are used only as needed, but for no longer than necessary. Research has shown inhibitors of these enzymes have therapeutic benefits, including relief from neuropathic pain, anxiety and inflammatory bowel issues.

What Does the ECS Do?

When an imbalance is detected, the Endocannabinoid System synthesizes endocannabinoids that in turn interact with cannabinoid receptors. This prompts a chemical response to return the physiological process back to homeostasis. However, in some cases, there is a glitch in ECS signaling. This condition is known as Clinical Endocannabinoid Deficiency (CECD). There is no explanation as to why this condition occurs, but theories include:

However, as hinted above, the ECS is not just affected by endocannabinoids. It can also synthesize plant-sourced cannabinoids (phytocannabinoids) like THC and CBD. This means if we experience an endocannabinoid deficiency, we can supplement using phytocannabinoids like THC, CBD, CBN, CBG, etc. Moreover, the efficacy of cannabis can increase when consumed with other plant-based molecules like terpenes and flavonoids. Research indicates that cannabinoids have a synergistic relationship with terpenes and flavonoids, meaning their combined medicinal effect is greater than the sum of their individual parts.

By understanding the purpose of the ECS (which is to maintain homeostasis in the body), and in acknowledging the presence of the ECS across so many systems (to include our nervous and immune systems), one can conceive how cannabis-therapies might actually work. By stimulating and supporting our endocannabinoid system, its entirely possible to find natural, plant-based relief from a multitude of conditions.

Have questions about CBD or the ECS? Need help selecting product? Contact us as [email protected] We’re here to help!